In the past two years or so we've been kind of forced into using video calling apps as we transitioned into work-from-home setups. Services like Google Meet and Zoom, among others, have been instrumental in easing this transition, allowing us to continue performing our work, attending our classes, and generally connecting with other people.

In this first article of a two-part post, we're going to take a look at how we can build a basic video calling app using Web technologies including WebRTC. In the second part, we will integrate Firebase into the app to make it support multiple calls/meetings with multiple participants.

This article will not be focusing on "building the next Zoom app" (although I won't stop you from doing so!) but instead on exploring and experimenting with the fundamental concepts of how video calling apps work in general, so we can build whatever we want on top of it.

Video calling apps use WebRTC under the hood for peer-to-peer communication of streaming data between browsers (also known as peers). These apps need to do several things:

For #1 on our list, we can use the MediaStream API in order to get the audio and video data that we can stream to our peers. We can obtain a media stream in different ways:

Additionally, we can obtain media streams with certain constraints, such as if it should only contain audio or video or both, what video resolution to get, which camera device to use (front or rear camera, or a specific device), etc. We won't get into all of these options in this post, but all of them are described in the linked documentation.

As an example for this article, let's get a media stream containing video and audio tracks:

In order to stream our media stream to the other peer once our peer connection is established (#5 on our list), we need to add all of its tracks into the peer connection:

Next, for #2 on our list, each peer needs to determine how the other peer can connect to it. A technique called Interactive Connectivity Establishment or ICE is used to negotiate the best way to connect the peers.

When direct connection is not possible, for example because of NAT traversals and firewalls, ICE will try to use an intermediary TURN (Traversal Using Relay NAT) server to relay streaming data. This process of determining IP addresses and ports is usually referred to as "finding candidates", and each viable option that can be used to establish a peer-to-peer connection is called an "ICE candidate". 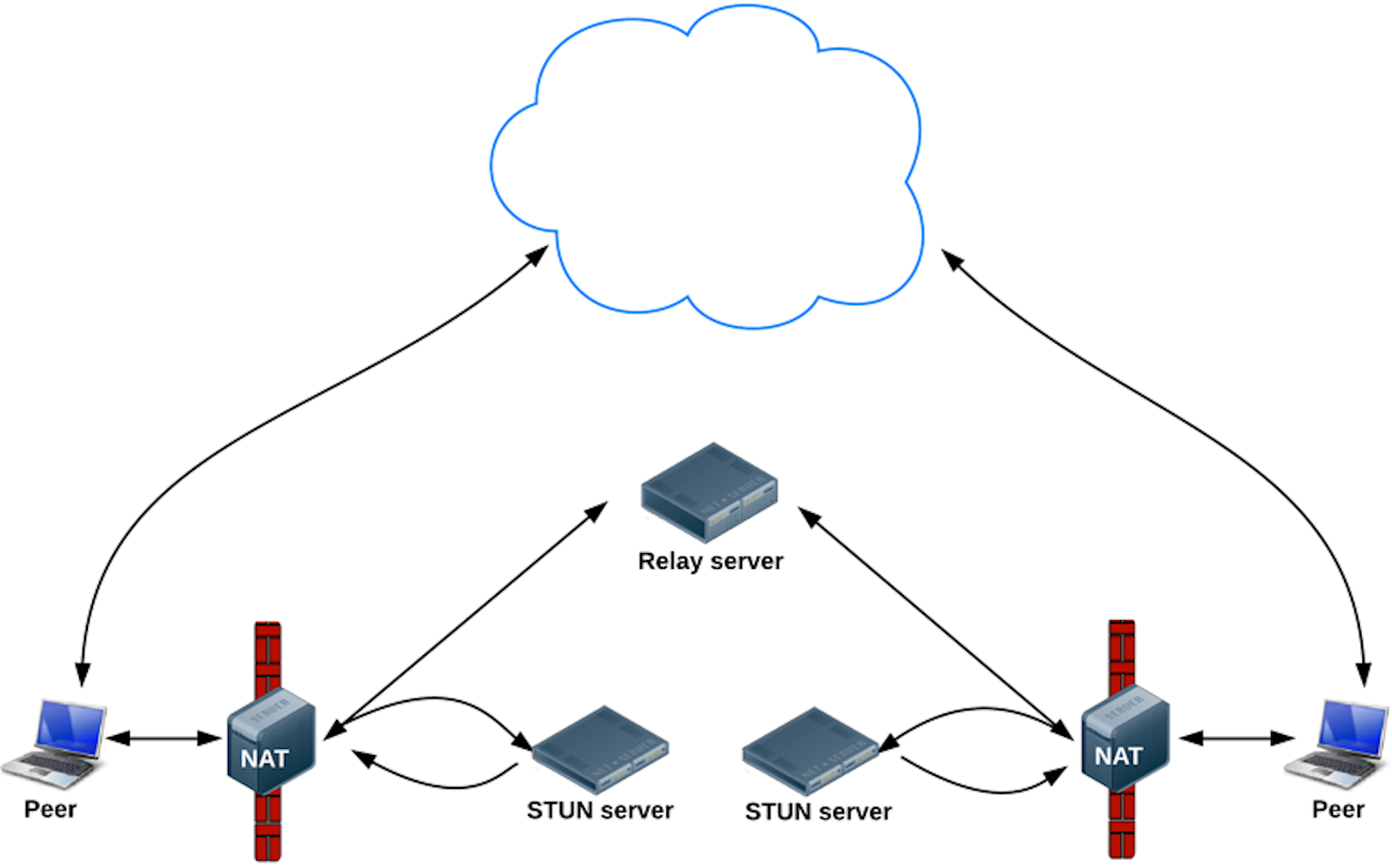 Image from https://web.dev/webrtc-basics: Get started with WebRTC

Now that's a lot of terms and acronyms and servers to remember right now, but thankfully in our code it's as simple as passing additional options to our RTCPeerConnection object, and the WebRTC API will take care of all the complexities of finding ICE candidates. Let's create an RTCPeerConnection that uses one of Google's free STUN servers:

Earlier we added our media stream to the peer connection, now we can do #3 on our list and determine the media capabilities that our browser supports. This information (together with the network information) are described in a format called the Session Description Protocol (SDP).

Here's an example of what an SDP for our peer might look like. In here, we can see details about what media types we are going to stream, available ICE candidates, and supported media codecs.

Note that I had to remove a lot of lines from the actual SDP to keep it concise for illustration purposes, but a real SDP contains so much more information than this. Thankfully we don't need to deal directly with SDP, as the WebRTC API already handles this for us.

So now we're probably wondering, how do we obtain an SDP, and how do we share it to the other peer?

What brings all of these together is the process called signaling. This is how one peer communicates its intent to call the other peer, and how both peers exchange their SDP containing their network and media information. This is also the part of our video calling app where we write the most code for, since signaling methods and protocols are not specified by WebRTC.

To implement a signaling mechanism (#4 on our list), we can choose any two-way communication channel. This could be implemented using WebSockets, or a combination of Fetch API and Server-Sent Events. This can also be done using Firebase Cloud Firestore as we will see in the second part of this post. For this article, we'll keep it simple and use the [BroadcastChannel API](https://developer.mozilla.org/en-US/docs/Web/API/Broadcast_Channel_API) so we can let two local browser tabs call each other. First let's create our channel for signaling:

Now let's say you want to initiate a call to your friend. The flow is going to be as follows:

And just like that, the peer-to-peer connection between you and your friend is now established!

Just a couple more things to take care of to complete our video calling app, and both have to do with events that get sent to the RTCPeerConnection object.

First is the icecandidate event, which gets sent when new ICE candidates are identified and added to the local peer, which usually happens when we call the peerConnection.setLocalDescription method. When we receive such events, we need to send it to the remote peer through the signaling channel, so that the remote peer can add it to its set of remote candidates.

Second is the track event, which lets us know when a media stream from the remote peer arrives to us through the established peer connection. When we receive such events, we need to display the media stream in the page so we can see the peer we're on a call with.

At this point we've actually already written most of the code that we need for our video calling app. All that's left to do is to just put them all together so we see the overall code and where each code snippet above falls into. To spare us from a very long code snippet in this post, please allow me to link to the file in the GitHub repository containing the complete code.

One thing that made it challenging to understand the complete flow in the beginning was the fact that we use the same JavaScript file in the caller and callee peers, which means that file contains the code for handling the signaling and event handling for both peers (sometimes if I read the file it looks like a peer is trying to connect to itself). For me what helped make it less confusing is to keep in mind in which peer (the caller or the callee, or both) a code snippet is meant to run for.

Congratulations, we just built a very simple video calling app! At this point it is very minimal and has several limitations. One limitation is that since we are using the BroadcastChannel API for our signaling mechanism, it means that only two browser tabs on our local computers can call each other for now. Our video calling app also currently doesn't support having multiple participants within the same video call. We will address all of these limitations in the next article where we will change our signaling mechanism to use Firebase Cloud Firestore.

In the meantime, thank you for reading this article. If you have any feedback, comments, thoughts, etc. please let me know!